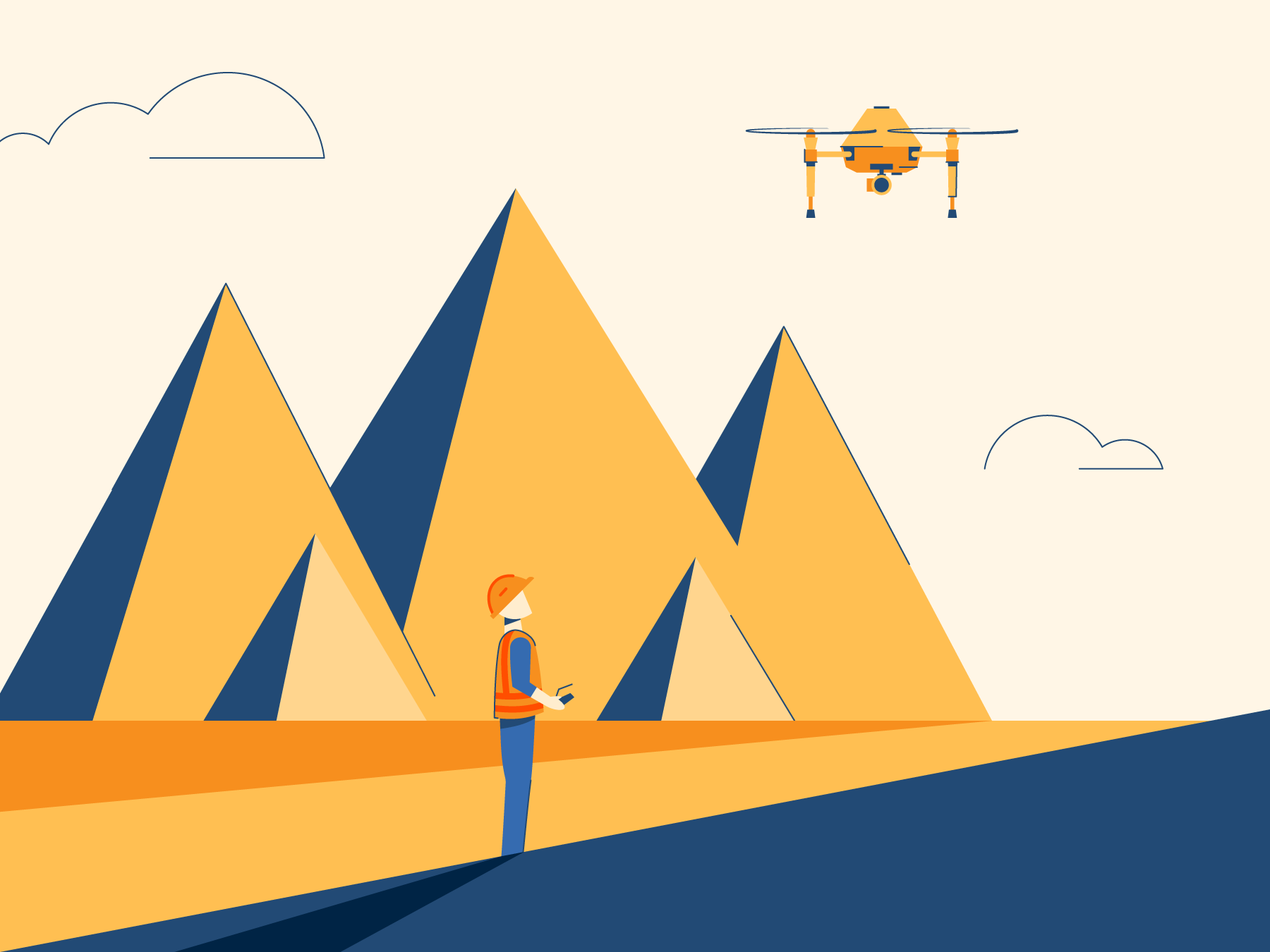 Ever since the time of the pyramids, the construction industry has been growing to reach where it is today, accounting for 7 percent of the US GDP in 2017. We have come a long way from the steam engine, now utilizing advanced technology like drones for efficient completion and project closeout. We’ve also come a long way in seeing the field evolve from being dominated mainly by males as more and more women are joining the trade.

There are still a lot of facts about construction that many, even those in the industry, don’t know. Luckily, we’ve compiled a list of some of the most interesting construction facts to give a better idea of the industry at large. 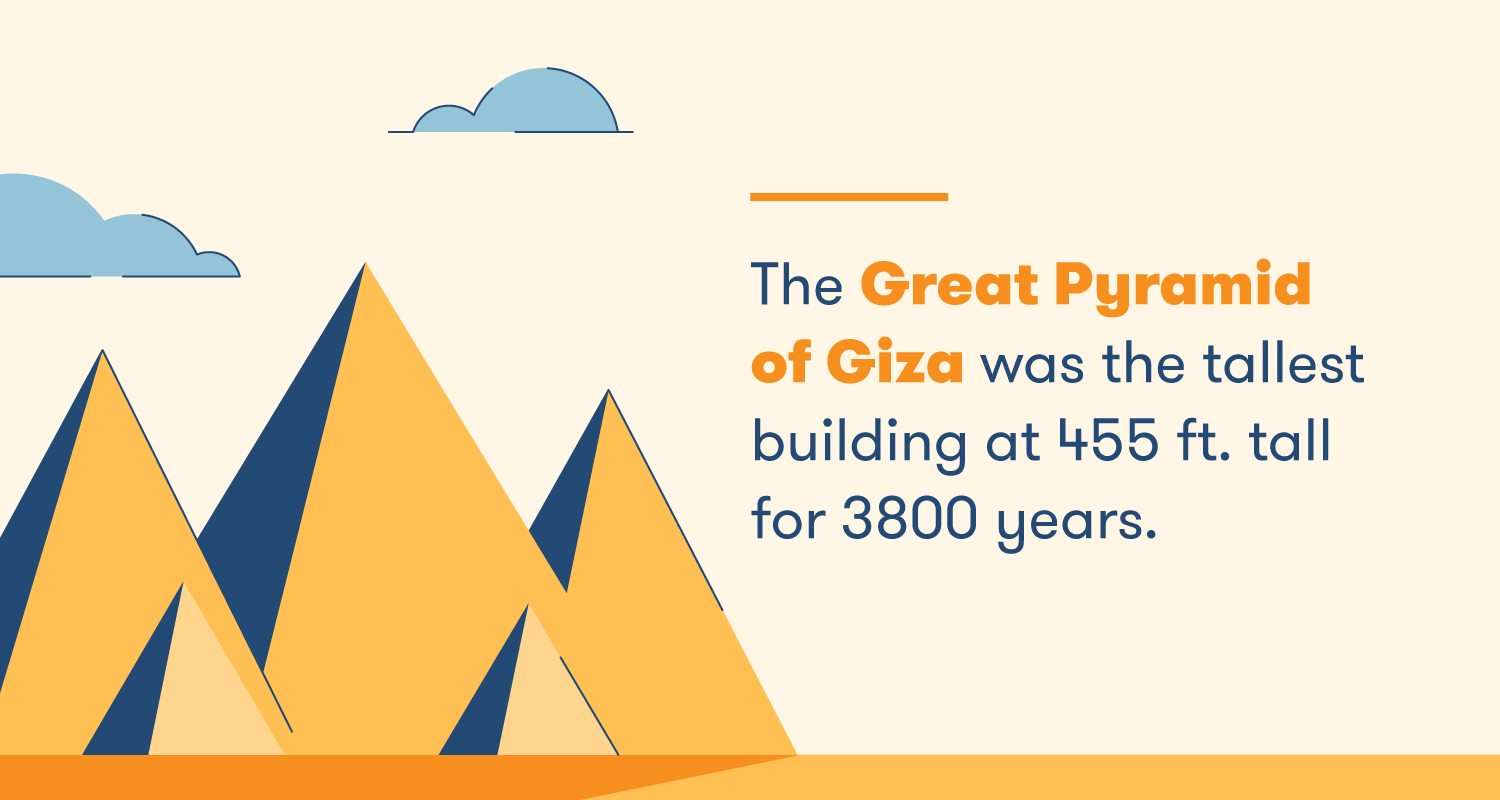 1. The Great Pyramid of Giza was the tallest structure in the world for over 3,800 years.

It is said to have been constructed from over 2,300,000 blocks of limestone, although no one can agree on whether the workers dragged, lifted, or rolled them into place. Adjusted for modern costs, at $496 per block plus labor and modern materials, the pyramid would cost $1.2 billion to build.

At 455 feet tall, it was the tallest building in the world from the time of its completion around 2560 BC to 1311 AD. Currently, the Burj Khalifa is the tallest structure in the world, but no building has held the title for as long as the Pyramid once did.

2. Concrete has been the most popular building material throughout history.

Concrete has been used for some of the most famous structures like the Roman Pantheon. In fact, the Ancient Romans created their own special concrete that we’re barely learning the ingredients to (the secret ingredients are lime, seawater, and volcanic ash!).

Today, with the recovery of the housing market, the need for concrete specialists and equipment has risen.

The world was already modernizing by the time of the Industrial Revolution, but the steam engine helped quicken the pace. Construction materials were able to be transported quickly over land using locomotives powered by the steam engine.

As time progressed, diesel replaced steam engines due to diesel engines’ reliability, low maintenance, and speed. Currently, there’s only one steam locomotive operating on a Class 1 railroad that has never been retired, and it’s mainly used for special appearances.

Nevertheless, the efficiency and adaptation of construction transportation is built on the steam engine’s revolutionary production. 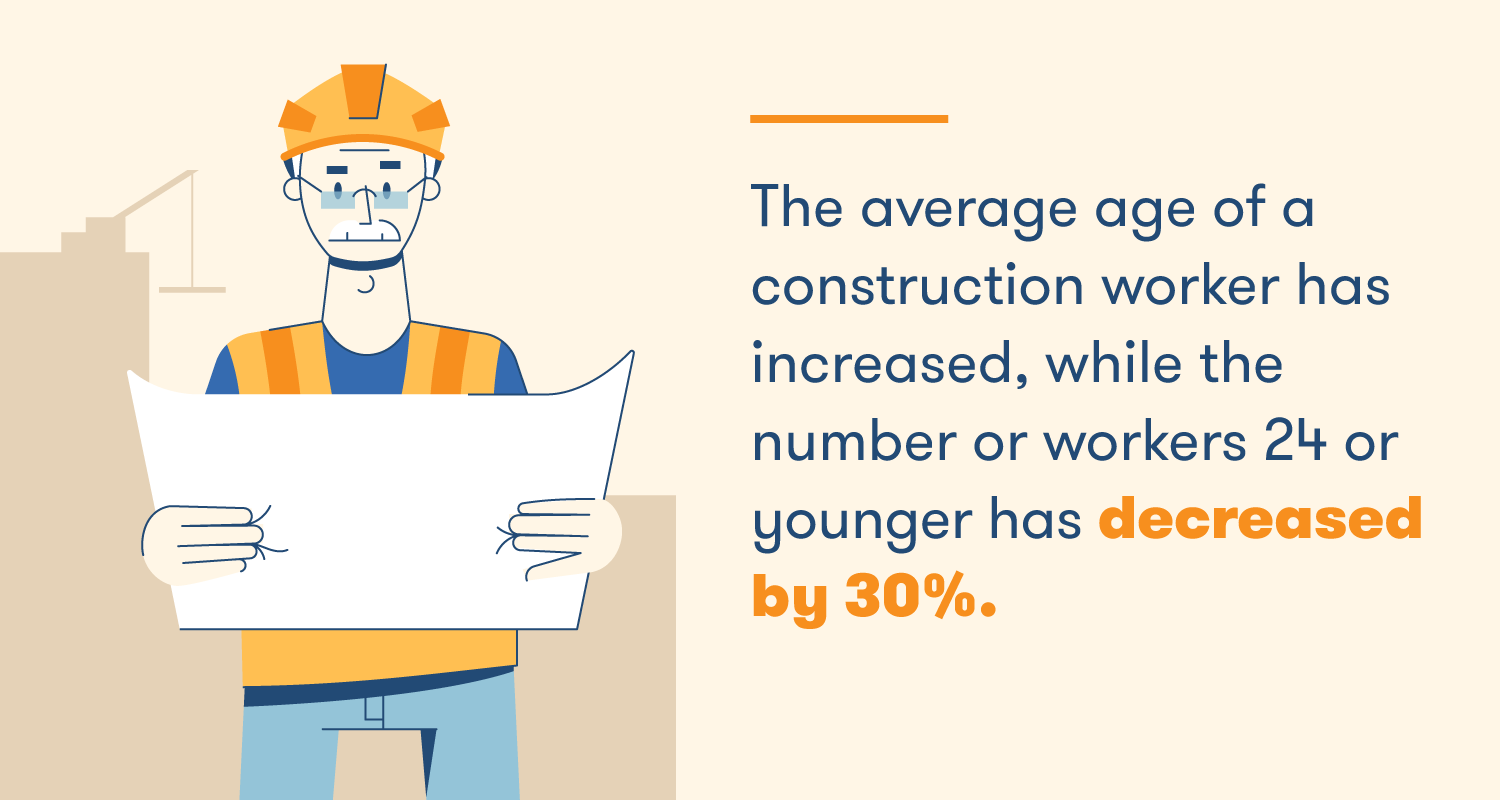 4. The average age of a construction worker today is 42 years old.

5. Younger generations are less interested in the construction industry.

According to U.S. Census data, the number of workers aged 24 years or younger entering the construction industry decreased by 30% between 2005 and 2016.

Young Americans have many misconceptions about the construction industry, like that the industry is somehow unstable or how you can’t earn a lot of money when compared to college-educated careers. With cities across the country hiring for construction jobs, there’s never been a better time to start a new career in construction.

6. Although the industry is growing, there is currently a shortage of construction workers.

The construction industry has recovered and grown since the 2008 housing crisis, but there is still such a shortage of workers that the construction industry can’t fill the demand. There are plenty of reasons why this is happening, but many companies are tackling the issue by offering competitive benefits and battling misconceptions. 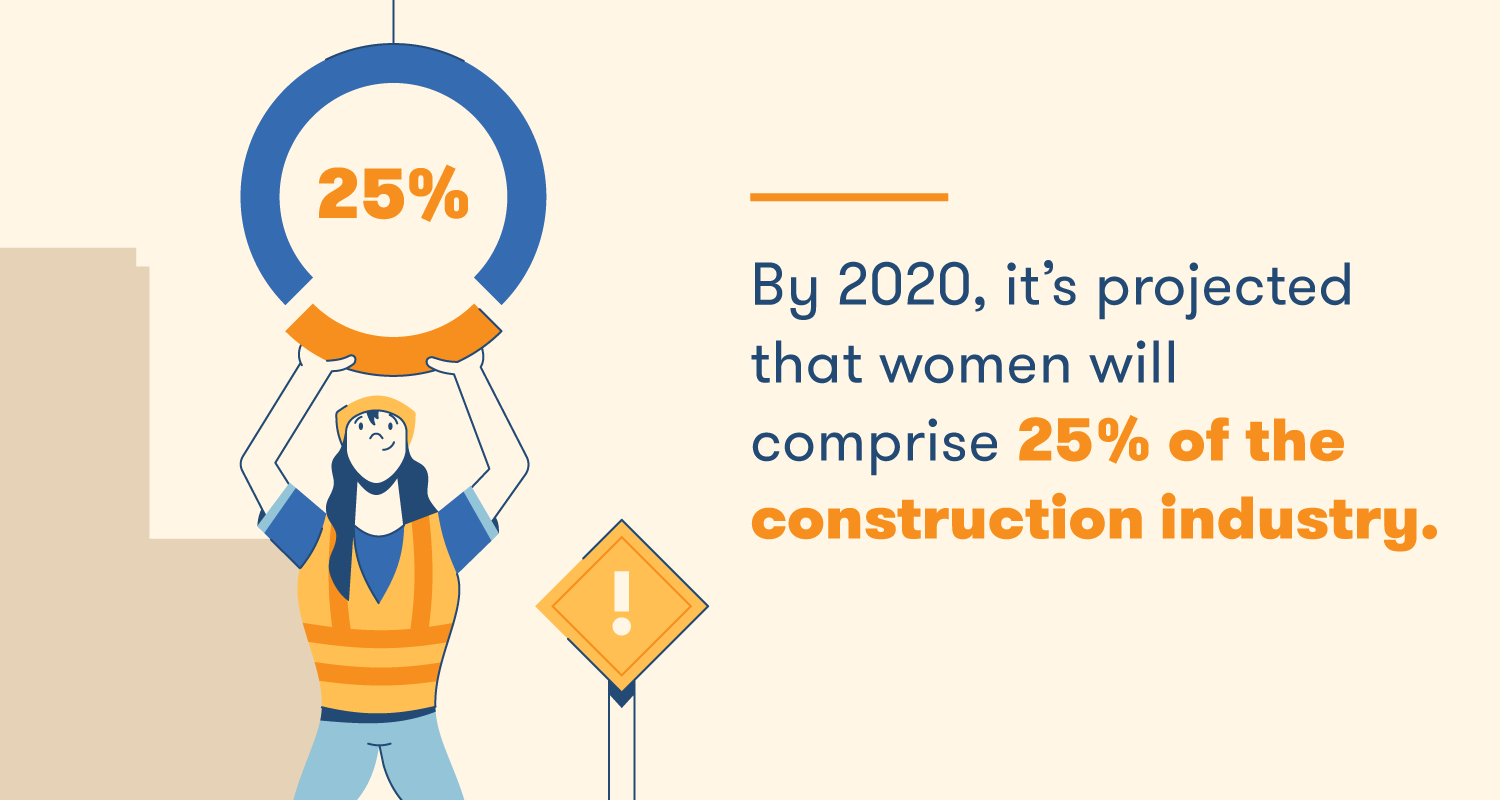 During WWII, thousands of women worked construction jobs; between 1940 and 1945, the female labor force grew by 50 percent. After the war ended, up to 85 percent of women wanted to keep their jobs, effectively paving the way for women in the labor force.

8. Women comprise only 10.9 percent of construction workers in the field today.

9. By 2020, women will account for 25 percent of the construction workforce.

Many companies are looking to hire more women in construction, and that means tackling some of the barriers in the industry. Luckily, many are making strides in the industry and are encouraged by their superiors.

In 2018 alone, almost 1 in 3 construction companies promoted a woman to a senior position. Likewise, from 2007-2018 there was nearly a 94 percent growth of women who owned a construction site. By 2020, it’s expected that women will account for 25 percent of the entire construction workforce. 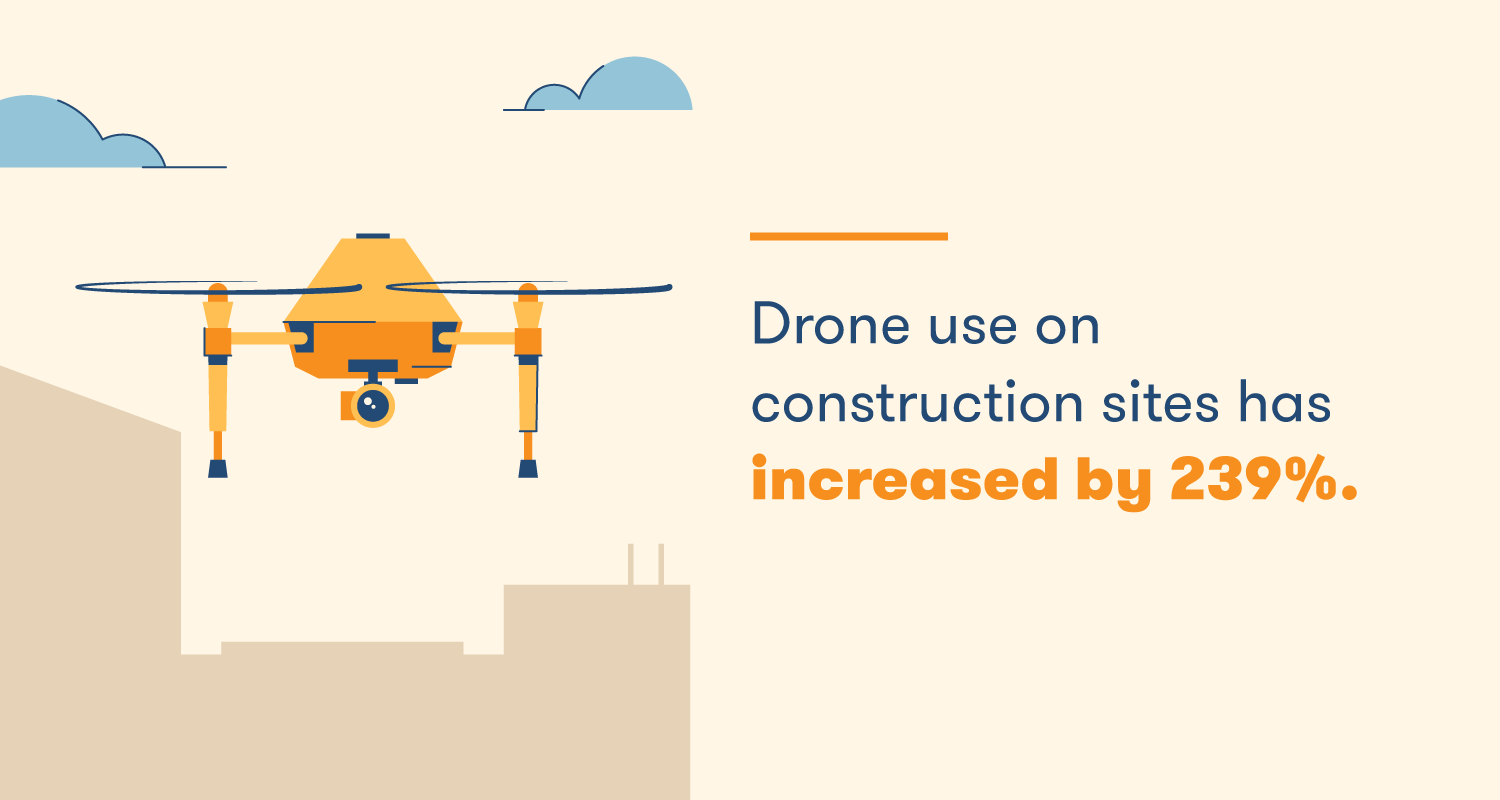 10. There are currently 1712.1 million tons of steel being used in the world today.

During the Technological Revolution and the Second Industrial Revolution, Henry Bessemer invented a method to mass-produce steel called the Bessemer process.

Before, it used to take a full day to convert three to five tons of iron to steel, but with the invention of the Bessemer process, it only took under 20 minutes.

In 2018, 1712.1 million tons of steel is used, with 2.6 million tons used for railways and tracks and 18.8 million used solely for concrete reinforcing bars.

11. There has been a 239 percent growth of drone use in the construction industry in the past year.

As technology has improved over time, construction methods have improved as well. For instance, drone use on construction sites has grown over 239 percent in the past year, the most of any industry. The mining and agriculture industries are right behind the construction industry, with a growth of 198 percent, and 172 percent respectively in the past year.

The aerial maneuverability of drones and the ability to record videos and take photos have streamlined and improved the construction project.

12. The construction industry labor shortage has created a technological boom.

The construction industry has always responded with innovation when confronted with change.

The labor shortage, sustainability awareness and software advancements have progressed construction technology into a science-fiction-like state. Things like exoskeletons have already sprung up in the field to help with some of the more difficult and menial jobs. 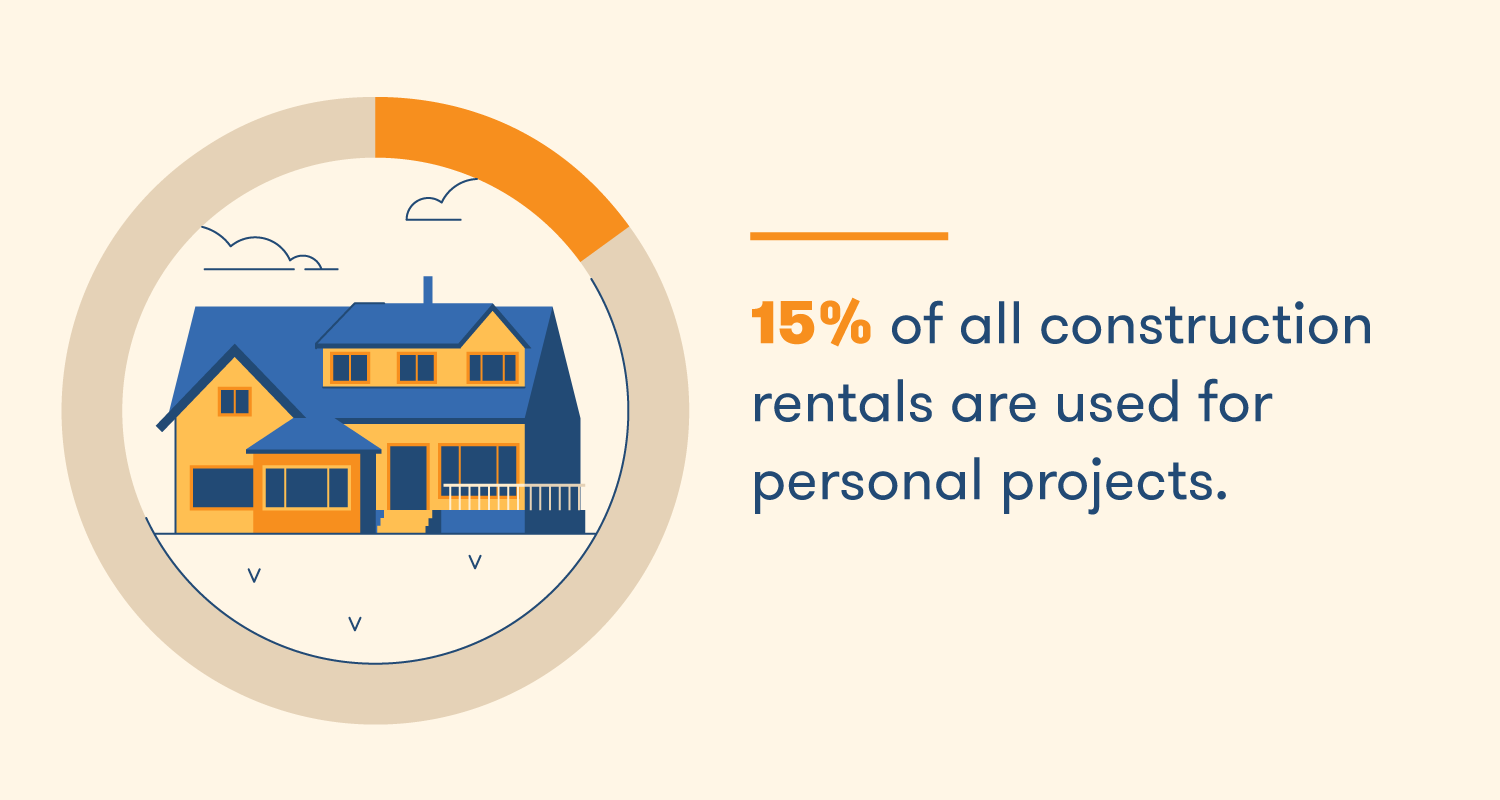 Not every company needs a carry deck crane, let alone anybody who is doing some private work on their yard. With rentals, many people can work on their own home improvement projects. In fact, 15 percent of all rental equipment is used for personal projects.

15. The average time of construction rentals is six days.

The construction field is a vast and sprawling industry with a lot of moving parts. Some aspects of the industry can go unnoticed for some time and make it appear as though it’s slowing down. Becoming knowledgeable about the industry can help break barriers and encourage others to view the field as a growing and adaptive market that helps create and build the societies we have today.

The construction field is a vast and sprawling industry with a lot of moving parts. Some aspects of the industry can go unnoticed for some time and make it appear as though it’s slowing down. Becoming knowledgeable about the industry can help break barriers and encourage others to view the field as a growing and adaptive market that helps create and build the societies we have today.